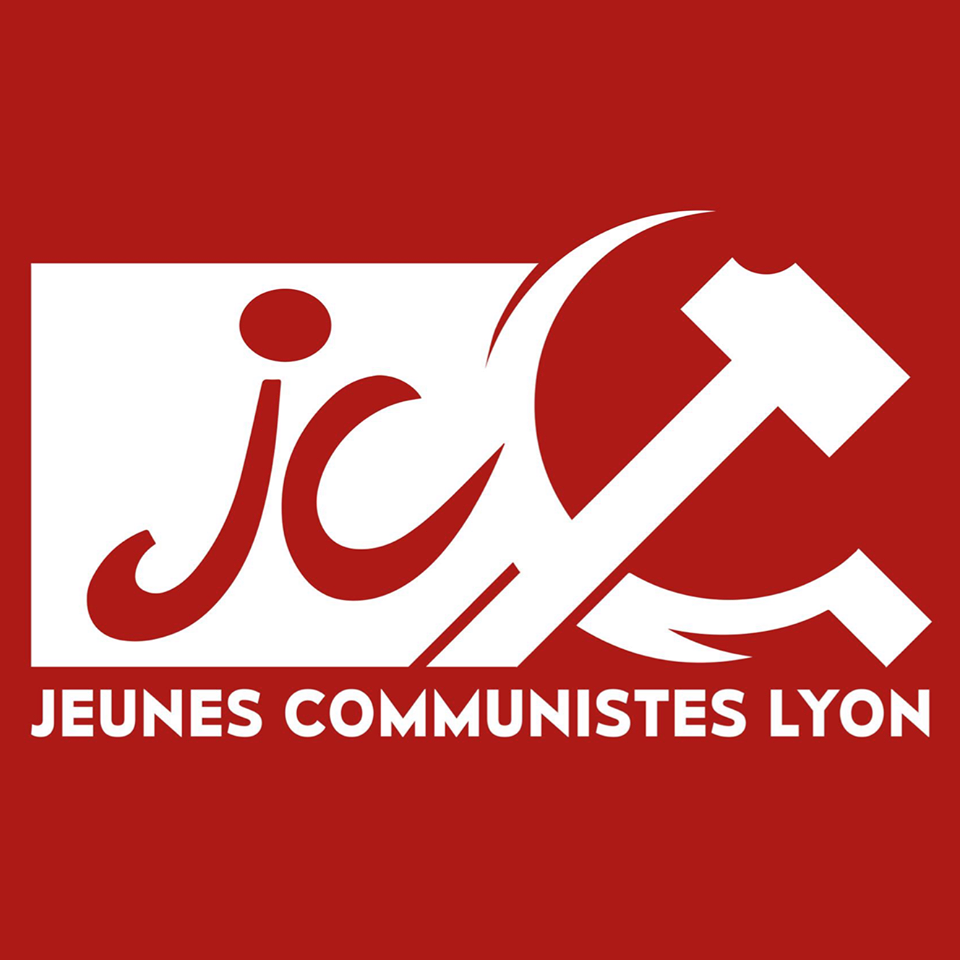 The Text as pdf

The political secretary of the Jeunes Communistes de Lyon held this speech at a conference of the “Kommunistische Organisation” within the “Luxemburg-Liebknecht-Lenin Wochenende” 2020 in Berlin. You can find a German translation here.

It’s an honour to be invited here today. We think that both our people have had a great common history of struggle, which we need to remember and to celebrate. The perfect example of this, for us, is the great fight against the Ruhr invasion that the french imperialists organised during the 20’s. The cooperation between our Parties at that time is to be remembered and is largely due to the assistance of the Communist International.

But I was not invited here to speak about this matter. I was asked to speak about the development of the communist movement in France, more specifically about my organisation. I was asked about this before the start of the strike against the pensions’ reform in France, so i was requested to talk about it as well because it would be a good example of what we were able to do as a little, local communist organisation regarding this strike.

So firstly, in order for everyone to understand where we are at right now, i’ll talk about what we are. The Communist Youth of Lyon was a part of the MJCF, which stands for National Movement of the Communist Youth. It is the youth organisation of the French Communist Party, the one born in 1920 after the founding of the Third Internationale. During the late 2000’s, the MJCF was being dismantled by the Leadership of the PCF at the time, and few of the local organisations survived, like the one in Lyon, which survived with a few members, but was not very active.

At the beginning of the 2010’s, the MJCF grew back in some areas, and started to gain back some traction. Of course, it did not have a Marxist-Leninist basis, but some of the local organisations, even if not mature, started to enquire about theory, and started to grow a strategical approach of revolutionary work.

By then, some local organisations started to think about socialism, revolution and the means to achieve it : Marseille, Lyon, Dijon, Saint-Etienne and others. They started to question the national leadership. During congresses and other such national events, they started to bring up matters like socialism, class struggle, Democratic Centralism and so on. They soon became an opposition to the national leadership, which was controlled by the reformist PCF.

Lyon became the centre of this opposition, and by then, all the national democratic events were prepared in Lyon, in order to reflect on what was needed to be brought up to the discussion, and what we proposed to the members of the MJCF. We tried to take back the leadership and to rebuild the organisation, against the reformism of the national leadership of the PCF, and of a large part of the membership base.

By then Lyon was home of a major federation, gathering about 100 members, having it’s own place to organise the struggle. It was then not much but a student organisation. We had no concrete links with the workers union, other than with their representatives. We pushed issues against the Leadership, in order to force them to create debates on socialism, and we had some victories in the congresses and national debates.

That’s why the leadership needed us gone. We were gaining momentum and we were closing in on victory. Many local organisations started to take interest in us. Thus the leadership decided to take action in a conflict we were in. On of our local section, Villeurbanne, a city in the suburbs of Lyon, was on the side of the National Leadership. The latter took advantage of it and made a politician move to get rid of our then Local Leadership, with the help of the local Communist Party, and their then allies, the Socialist Party, and the Left Party of Melenchon. They paid fake memberships to many unknown people, and managed to gather enough votes to eliminate our Leadership during a General Assembly of the members.

With that move, everything that our comrades spent years to build was destroyed in a few hours, and only a few of our comrades kept faith in the cause. They were the few ones, about five, that decided to rebuild an organisation. At that point, the local organisations that were our allies in the opposition either went to waste or strongly localised themselves. They focused on their local growth, in the hope that someday they could rebuild an opposition.

That’s what our comrades, which rebuilt our local organisation in Lyon did as well. They tried to build actual links with the Unions, they studied works of KKE about the social alliance. They rebuilt the organisation as it is now, with more experience of what reformism and opportunism actually are. With time, they also started to understand that PCF and MJCF were now bourgeois organisations, and that it could no longer bring us anything.

It is also at that point that we started to gather new members and our started to grow again. More students joined, but also more workers. We are now starting to build strong links within the Union ranks, like the railway workers, the chemical industries workers and others. As an example, two years ago, we organized a march to commemorate the sacrifice of workers against Nazism during World War 2, to which Five Hundred railway workers attended.

At the same time, we have tried to regrow links with local structures of MJCF, with whom we used to work. As such, we are now working with comrades from Strasbourg and Marseille, in order to rebuild a national communist organisation that could bring us an actual national perspective of our own. It’s still a project, and we face many issues in building it, but we are advancing, and if you want any further information, I will gladly answer to them later.

As an example of our experiments regarding the work towards the masses, our best examples are the Struggle Committees in Universities and High schools. we have been for building these mass organisations for three years now, with the goal to organise struggle on places of studies. We called them Struggle Committees, and we intend to use these tools to lead the mobilisation concerning national issues but mostly local ones, for instance, against school administration, for theimprovement of learning conditions, to defend cases of scholarship grants for students.

We tried to build these tools to counter the methods of leftists in universities and high schools. The leftists in these places are undermining the struggle. They want to keep students from organising on a local basis, they want to keep them from considering local demands. So, we decided to build these committees on local basis in order to organise students, first for their own demands concerning learning conditions, then to try and make them join the broader struggle for national demands.

Doing so, we managed to gather more and more students. They are not necessarily communists, but they recognise our place in the struggle and are fine with it. We also managed to mobilise them on the Strike against Pensions’ Reform. In the places where our comrades were present, we told them to push forward our demands, and to propose actions to join the workers on strike during demonstrations. This was one of the first times that we were able to lead the mobilisation of the youth.

Later, leftists succeeded to undermine our mobilisation, by pushing young and inexperienced students to make use of violence during strike pickets or demonstrations, bringing upon them repression from the police. We lost some support at that moment, but even so, we reached milestones that will be useful for years to come.

The work we have achieved in those Struggle Committees has been very different from the work we had to achieve in the Workers’ Union. In universities and high schools, there were no pre-existing Students’ Union in which we could intervene. We therefore had to build them by ourselves. We had to create those organisations, to build their credibility, and at the same time, keep working as the Communist Youth directly on other matters, such as French Imperialism, European Union and others.

This is very different from the work we must achieve in the Workers’ Union, the CGT. The CGT is already well established, it’s the first union confederation in France, and it exists since 1895. In those unions, reformism has deep roots, and we had to think about strategies to make our influence grow in it without compromising our positions. We took our first foothold in the Union by participating into the Unemployed Committee, a branch of the CGT that’s built on local basis, either to help Unemployed to defend their rights, or to struggle against unemployment.

I need now to make a quick explanation about how CGT works. When you join the Union, you join two different components: Your Union, in your workplace, which is linked to a national branch (Steel Workers, Railway Workers, Chemical Industry Workers, etc.). On the other hand, you join a Local Union, on a geographical basis. This one depends on where your workplace is located. This second component is supposed to be the basis of the inter-branch struggle. It’s also this component that is supposed to help grow the membership basis, by working towards new workplaces, or in workplaces where there is no union yet.

Both components have separate leaderships, and the Confederation, which is the national leadership, is supposed to be the link between the different branches of the industry, and the Local Unions.

As we had no foothold in any particular branch, we needed to use Local Unions. That’s where we could meet with workers from different branches. The Unemployed Committee served this purpose: we could then reach out to different branches to suggest actions against unemployment. For example, we did some actions, where we invited Unemployed workers to bring their resumés that we then gave to our comrades from the Railway. They then had to push those resumé towards their employers, in order to force them to hire those Unemployed workers. This had a double political message: we need more Railway Workers to ensure a safe Public Service, and we need jobs por Unemployed workers.

All those actions secured us a strong foothold in the CGT, from which we could launch further developments, toward other branches, in the hopes of being able to push forward demands we reflected upon between communists.

I think i’ve covered a vast majority of our current work towards the masses. Of course, we have other campaigns: Against French Imperialism in Africa, Against European Union. But those are really different because we do not expect masses to join the events we organise about these campaigns (demonstrations, meetings, etc.). It’s more about trying to inform workers about these subjects that we thing very important.

We think that our work toward the masses, in the CGT, in universities and high-schools really are important, in order to push our demands, our analysis forward. The working class, even if organised in unions, needs a leadership, and the ongoing strikes really shows it. It also need allies, and it is a communist task to found those alliances, with the anti-monopolistic strata. We intend to lead this struggle, while, at the same time, attack imperialism at it’s heart.

Let’s learn from our pioneers