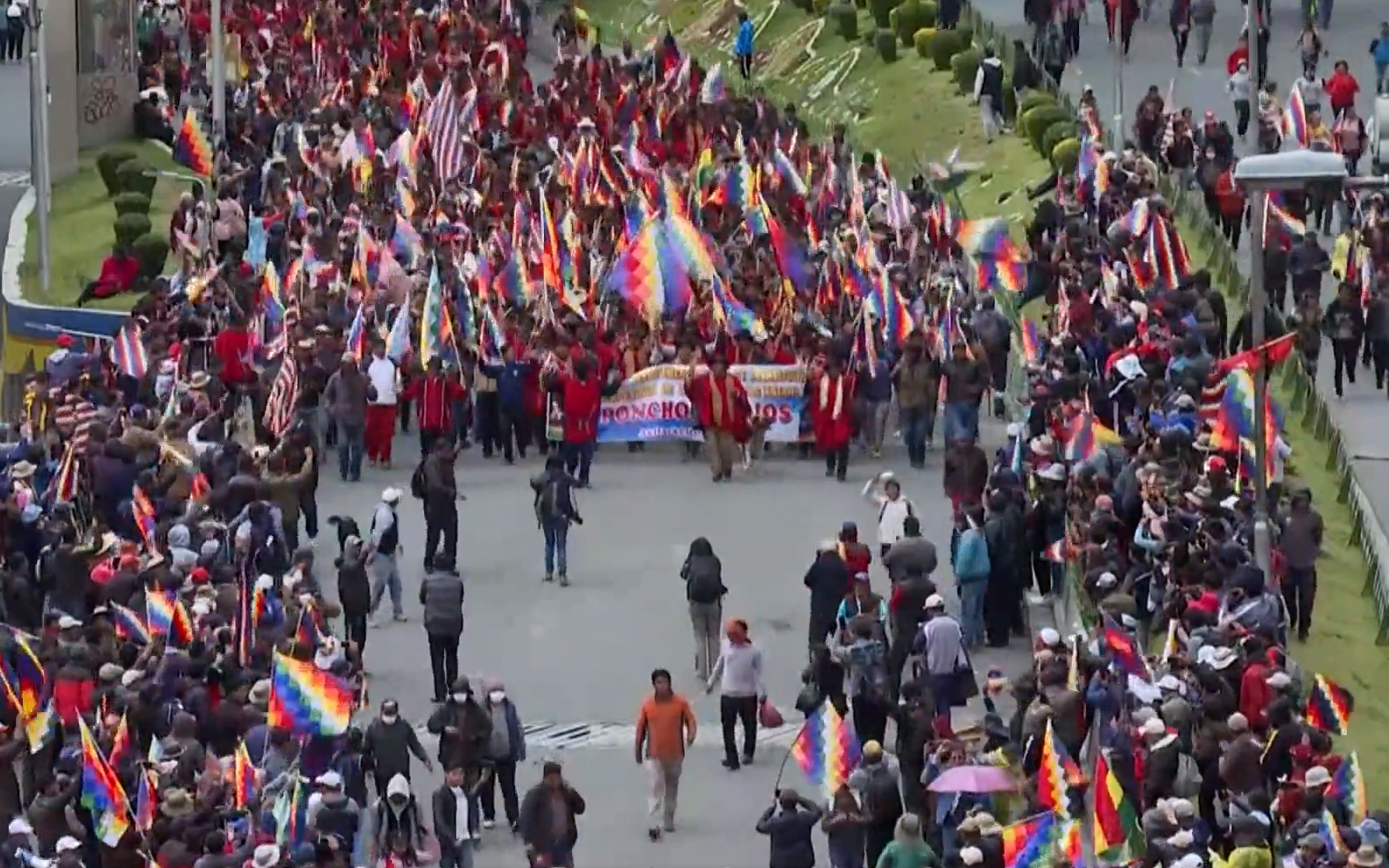 The campaign against the democratically elected Bolivian president Evo Morales and his party Movimiento al Socialismo (Movement for Socialism – MAS) has intensified last year and reached a bitter climax last weekend with the forced resignation of Morales. Parts of the military and police have taken the side of the ultra-right opposition and put pressure on MAS politicians to resign through acts of violence, kidnappings and the pillaging and destruction of homes.

The opposition movement presents itself as democratic, as it opposes the alleged dictator Morales, it presents itself colorful and youthful. But the excesses by police and military during the last days, racist above all in nature, show clearly the actual thrust. The recognition and empowerment of the indigenous population, the expansion of the education and health system to the detriment of private corporations and, above all, the nationalization of central industries were a thorn in the side of US imperialism and the dependent Bolivian bourgeoisie.

In contrast to Venezuela, the developments that have meant an improvement in the living conditions of the people are based not only on the sale of oil, but on an expansion of the productive forces in state hands. However, even in Bolivia, state power is not in the hands of the proletariat and the strata allied with it. In Venezuela, this could be balanced by the ideological solidarity of the military with the Bolivarian process, which was not possible in Bolivia.

The coup is followed by terror against activists of the popular movements and supporters of the government. The police brutally attack the demonstrations of the popular masses and raid the poor neighborhoods, those raids being directed against the people’s movement. Indigenous activists, trade unionists and MAS supporters are insulted, beaten and tortured.

The mass and militant demonstrations against the putschists in the last days give hope and show a courageous and well-fortified people who are ready to defend the achievements of the last 13 years. The mass and militant demonstrators shout the slogan “ahora si, guerra civil” (translated: “civil war now!”). In the next few days it will become clear how the movement will develop and whether armed people’s units will emerge from it and how the reactionary forces will react to it.

It is indicative that the German government welcomed the coup after less than 24 hours. This shows how much they care about democracy and human rights, as soon as a democratically elected government decides to expel the imperialists from the country. This reminds of the cries of joy of German politicians about the outbreak of democracy in Chile, when on 9/11 1973 one of the bloodiest military dictatorships of the continent began. It is also worth mentioning in this context that the German-Bolivian lithium project, which was stopped a few days before the coup, is now considered possible again. After Argentina, Bolivia has the largest lithium deposit in the world. A raw material that is used, among other things, for batteries for electric cars and smartphones.

Also the “Neues Deutschland”, the newspaper of the Left Party (Partei Die Linke), as well as the “taz”, which is regarded as “left-wing alternative”, justify the coup. Thus it says in the “Neues Deutschland”: It is not nice, the way that Evo Morales had to abandon the presidency. For Bolivia’s democracy, however, it is important and correct that Morales is finally followed by someone else. (“Learn to let go”, Neues Deutschland 11.11.2019). These forces, too, prove once more that at the end of the day they are on the side of imperialism and reaction.

We condemn the criminal coup carried out with the support of foreign imperialist states, including the USA and Germany. We express our solidarity with the Bolivian people and their resistance. We emphasize that the Bolivian people have every right to defend their achievements with all means at their disposal, including force, and to strike back the reaction.